Robotics & AI are Mission-Critical for Growth in Semiconductor Chip Production

After two years of legislative discussion, the US Senate has finally passed a long-awaited $52 billion bill to strengthen US chip manufacturing. This need was spurred, of course, thanks to the semiconductor shortage caused by pandemic-related supply chain issues. For those outside the tech world, the semiconductor industry is quietly responsible for powering everything from our smartphones to our cars to even our fridges. In fact, most electronics today require a semiconductor chip to function, so yes, one could say that semis are foundational for powering many aspects of our daily lives.

In 2020 alone, more than 932 billion chips were manufactured globally, feeding a more than $526 billion industry, according to the World Semiconductor Trade Statistics  organization. That said, the organization expects 2022 to be another year of double-digit growth for the global semiconductor market, forecasting the industry will be worth $646 billion.

Despite the large number of chips produced, there has been a massive shortage in chip availability. Semiconductor Industry Association CEO John Neuffer has said the industry is under “withering pressure” to build new manufacturing facilities to respond to the explosion of demand for chips. As a result, countries around the world are responding. How? By building out a larger capacity to house the next generation of demand to come. In the microelectronics industry, a semiconductor fabrication plant (commonly called a fab; sometimes foundry) is a factory where chips are manufactured.

In short: bring in the fabs

From 2020-2024, 72 fabs are projected to be built across the world according to CNBC Business. Earlier this year, Intel announced a $20 billion investment to build two massive new chip factories in Ohio known as “mega fabs.” Taiwan Semiconductor Manufacturing Company (TSMC) also announced a $12 billion fab in Arizona as it ramps up supply.

So where do robotics, automation, and AI play a pivotal role in the chip process?

To comprehend why robotics and automation play such a critical role in fab plants, we first must understand the type of precision and cleanliness that is needed in chip manufacturing. Overall, semiconductor manufacturing is a complicated process that requires very little human interaction. One example is the manufacturing of wafers, a thin slice of semiconductor substance. This process must be extremely precise and cannot tolerate any particles such as hair or skin falling onto the wafer and damaging the chips. To put it in perspective, a 28-nanometer chip is equivalent to about 1/1000th of the diameter of a human hair, so even a speck of dust could cause collateral damage. That said, current iPhones use 5-nanometer chips, so you can imagine how precise the process needs to be.

For example, Teradyne’s automated testing equipment, called the UltraFLEX, and IG-XL software are responsible for wafer testing. The UltraFLEX’s performance allows integrated circuit producers to meet goals of “zero” defect rates and the IG-XL software speeds time to market and reduces cost of testing by transforming test program development. Automation equipment like this lowers costs for consumers and shortens time to production. According to Teradyne, their equipment testing machines account for testing nearly 50% of the world’s semiconductors.

For these reasons, along with the need to be efficient and timely, most fabs run a fully automated setup. In fact, Taiwan Semiconductor Manufacturing Company reported that a single fab’s automated devices travel approximately 250,000 miles a day, or 10 times around the earth. That’s a lot of automated movement.

Furthermore, it takes several different types of robots and technology on the front and back end of the process to create a successful fab. Some of the front-end equipment, including lithography, silicon wafer fabrication, cleaning and cleansing, chemical polishing, and deposition, require specifically designed robots. Back-end semiconductor capital equipment consists of testing, packing, and the construction of integrated circuits, which also use a variety of robotics and AI. 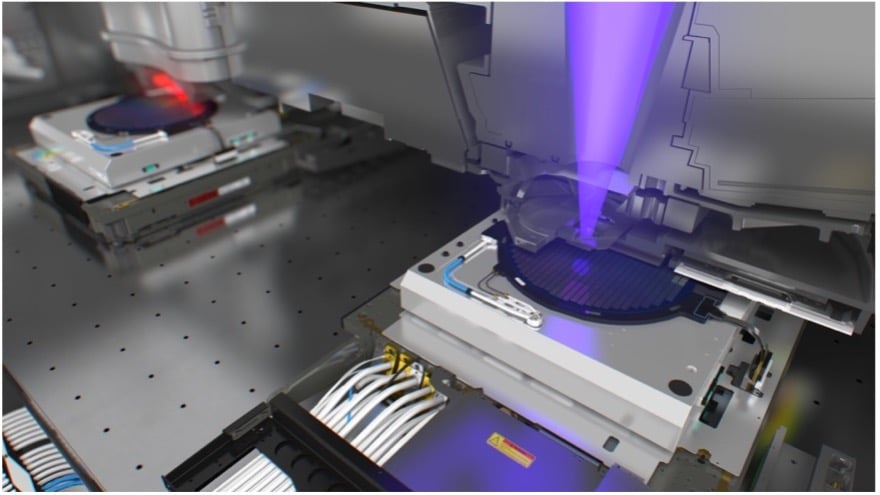 ROBO Global ETF Companies that we believe could win big from the growth of the semiconductor industry and foundries:

Semiconductor manufacturing is a highly complex process that requires precision and efficiency, and because of this, the semi industry will continue to rely heavily on robotics and automation for a variety of tasks. From robots handling essential micro parts to vision-enabled robots managing cleaning and inspection, these are all tasks that are critical to the success of a fab.

The combination of continued strong demand for chips, the large number of foundries being built, and necessity for semi companies to improve cost and efficiency will not only benefit semiconductor manufacturing companies such as TSMC and Intel but also companies like Teradyne and more who are involved in the everyday front- and-back-end processes.

Holdings are subject to change.