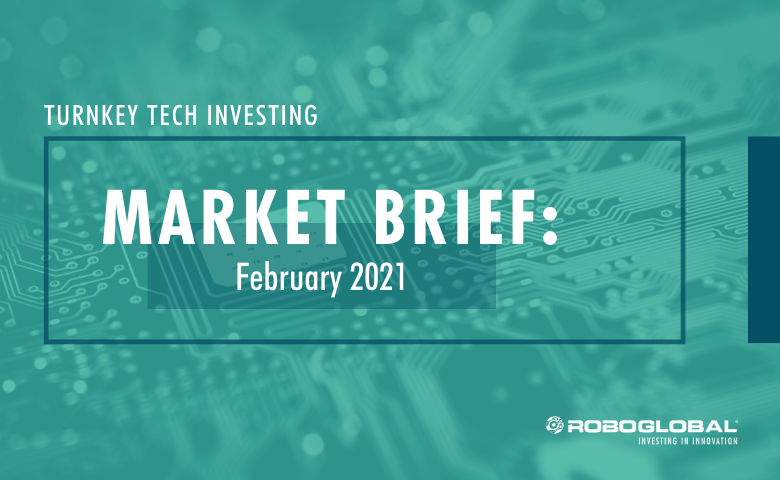 As we all set our sights on the return to ‘normal,’ perspective continues to be every investor’s greatest friend. Despite the slight downward turn at the index level and the more dramatic spike in volatility that came late in the month, February’s overall scorecard was quite constructive. iShares Russell 2000, S&P 500, and MSCI World all closed out the month up +.28%-.45%. For the ROBO Global investment strategies, the ROBO ETF closed the month +1.15%, the THNQ ETF rose +1.88%, while the HTEC ETF declined -2.94%.* For performance data current to the most recent month end, click here.   Looking at volatility,** despite last week’s ~30% rise in the CBOE Volatility Index, the fear gauge was down -7% on the month. The rate-fueled pullback is clearly causing some pain, but despite a .37% rise on 10-year Treasuries, global equities remained strong.

As the world continues to slowly re-open, the investment community seems to have one eye on rising interest rates, and the other firmly focused on the shifting global economy. However, though higher rates and their impact on bond yields had investors on high alert in February, it’s doubtful the shift will have any meaningful impact on the broader market. Fiscal and monetary support remains strong, and it seems likely that the Fed will take any steps necessary to assuage the bond market and prevent the sort of rapid rise that could endanger the recovery in the real economy.

With this backdrop in mind, stock picking continues to gain in relevance. As we slide out of an era of historically low interest rates, we are moving into a period of risk for the highly successful playbook of the past decade: finding comfort in Growth. As investors seek new paths to Alpha (active return on an investment), exposure to cyclicality and re-opening winners, as well as secular winners that trade at reasonable prices, may offer the traction needed. It is a theme that is well represented across the ROBO Global indices.

Two sectors that stand out to us in this environment are Automotive and Electronics, both of which were hit hard in the past 18 months due to the brutal combination of a global downturn in capital spending in 2019, followed almost immediately by the shockwaves of the pandemic in 2020. As the two largest industries that rely on robotics and automation, the struggles of these key sectors trickled down the supply chain to sampan activity for factory robotics manufacturers and their suppliers. But times are changing. As Automotive and Electronics activity picks up in the coming months, we expect the factory robotics market to accelerate strongly. Already, demand has bottomed out in China and begun to stabilize in both the US and Europe. By the end of 2021, we believe the installed base of factory robots will exceed 3.2 million units—double the level in 2015. Considering that this represents just a tiny fraction of the human workforce of 360 million in manufacturing, there’s plenty of room to grow in the years ahead. In response to technological advances, the digitization of production systems, and an increase in worker shortages that can be addressed by robotics, we expect to see significant upside and double-digit growth over the next five years.

The automation boon that is now in process is already bearing fruit for companies across the theme of robotics and artificial intelligence. NVIDIA and Brooks Automation are two perfect examples:

• NVIDIA beat and raised its outlook driven by strength from record Gaming and Data Center revenues. Quarterly revenue of $5B was up 61% YoY, with full-year revenue up 53% to hit $16.68B.*** The company remains optimistic about its proposed acquisition of Arm, despite facing several regulatory hurdles at the moment. Strongest among NVIDIA’s channels was Gaming, which brought in a record $2.5B for the quarter, up 67% YoY. Based on analyst estimates, the company believes that crypto mining could have contributed as much as $100-300M to their revenue thank to its new line of crypto mining processors. And though sales in Automotive declined YoY, even here, revenues were up 10% sequentially at $145M. Quarterly data center revenue exceeded expectations at $1.9B (up 97% YoY, including Mellanox’s contribution), and hitting a record $6.7B for the year, up 125%. The company expects data center AI GPU demand will continue to support double-digit YoY growth.

• Brooks Automation is seeing strong tailwinds for both of its business segments and anticipates a record year for revenues in 2021. In its very strong Q1, semiconductor solutions delivered 53% of revenues and grew 11% Y/Y, and life sciences drew in 47% of revenues and grew +36% Y/Y. Gross margins accelerated to 46%, with the margin for life sciences now at 50%. Net cash is $272M. The company attributes this strength, at least in part, to a shift toward greater automation of its systems and life science divisions, and product-cycle momentum in the semiconductor division. Brooks revenue growth appears sustainable, with multiple avenues of expansion continuing to push growth.

Speed and magnitude. These two words have come to define the COVID-19 era, and they are both enabled by innovations in robotics, artificial intelligence, and healthcare technologies. As we slowly but surely move past the pandemic, the companies leading the charge in these areas offer more than just technology innovation: they present the promise of a faster, more efficient, more connected world—and opportunities for investors that should not be overlooked.

*All Data is Sourced from Bloomberg

** Volatility is a statistical measure of the dispersion of returns for a given security of market index.

Performance data quoted represents past performance and is no guarantee of future results. Indices are unmanaged and do not include the effect of fees. One cannot invest directly in an index.